Mapping the Mataura River with the latest LiDAR tech

If you’re in the Southland region, you may have seen our twin-engine plane flying up and down the Mataura River and wondered what it’s all about! We've been out there measuring the riverbed, mapping out where the gravel is and how it has moved. This will help develop a better understanding of the current flood risk and how it can be mitigated.

We flew the river in two sections – first starting from the coastal outlet to Waikaia. We decided to fly this section first as the conditions were perfect. With the river flowing at around half its usual height at the time, the water was running clear which meant we could capture the best picture of how the riverbed looks.

Using the newest LiDAR technology, which we’ve just purchased into New Zealand, we can gain a better picture in a much shorter timeframe. With traditional survey techniques, we would have to measure each part of the riverbank manually, and then gauge the base of the river to get the depth. Capturing every metre of the river like this would have been near impossible.

Jason Harvey-Wills, Landpro’s General Manager, explains: “Using this LiDAR system for our clients is a New Zealand first! The ability to measure above and below the water by flight saves a massive amount of time and resources, while giving us a 100% true picture of the entire waterway and how it changes over time. By re-flying at a later date, we’re able to see exactly where the sediment has moved and deposited to. This is critically important for managing flood protection, gravel extraction, port dredging, and beach erosion. We’re certain this technology will provide huge benefits for New Zealand in years to come.”

Previously, LiDAR technology was only able to measure above water, as it bounces off the surface. But this new tech, using a special green lasered bathy LiDAR, can measure both above and below water. For good measure, our team will also do some traditional cross-section measurements on the ground to ensure our digital model is correct.

You can see what we captured in the image below. This is a digital visualization of the data captured with the LiDAR bathymetry – picked up from 600m high, flying at around 130 knots. You can see the buildings, the base of the riverbed, and the river level in red where the laser has bounced off the surface. 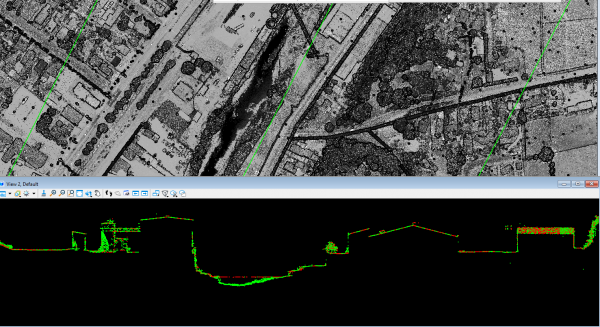 If you know the Mataura River well, you’ll be able to visualize the area behind the Mataura Paper Mill. Compare the photo below – where the cross section runs from the white building (left – the abattoir), across the river and up the paper mill side – where you can see a tree on top of a large concrete wall.

The final section above Waikaia was less flow-critical, as the river runs clearer and at lower levels than the first. That means we were able to map and measure the full river in a matter of weeks with a level of accuracy that was near impossible before purchasing this new LiDAR into the country. We’ll be able to fly again in 1-2 years’ time to gather an accurate comparison, better understand the dynamics of the river, and better understand flood risks in the area.

We've had a blast using this new technology and are looking forward to flying the next project.

Look out for our pilots flying overhead and give us a wave!